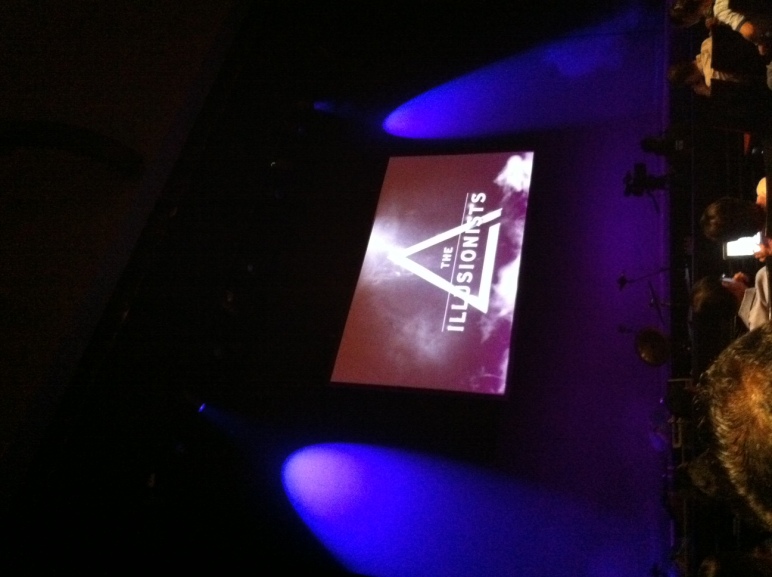 and The Grand Illusionist

Oh, what a team they make. From cutting out their head, to making a station-wagon disappear, from levitating bodies to multiplying birds and balls, from chewing ion razors to surviving Houdini’s predicament. They do it all. And with them is a lovely band playing to the que.

The Marina Bay Sands theatre impresses, one time more. The last time the Wicked was completely delightful, and left a very high benchmark.

From watching magic shows as a kid in birthday parties, Ive always wondered how they do it. Always tried to catch the trick like they say. Watching, “Secrets of the Greatest Magicians” on Star World only just honed my skills. While watching the Illusionists show I kept waiting for moments that would break the puzzle. But the illusionists are so darn good that the secret completely escapes my eye. Its a good thing though, cause then you believe in wonder, and are left amazed, in the true sense of the word.

The mentalist claims to be a mind reader. Now how true that is questionable, but as long as his act is on its entertaining. The audience is engaged as one after the other he invites real people into the tricks. Tifan is not a common name I agree, for him to know.

The escapist, brought me to have pity. But attempting Houdini’s challenge was brave I should say. Two and a half minutes under water, hanging upside down with the wrista and ankles tied, and trying to break free. Well thats a whole lot of things getting done those very minutes.

The gentleman, yeah. Thats when I decided to take my forty winks. Birds and all, very nice. Presley’s music, very nice. But he really reminded me of a magician at a childhood birthday party. Like Yawn! really. The pretty birds kept fluttering. But those didnt leave a mark.

The Anti-conjurer, yeah the goth guy. Eating razors, a total of 8, slicing his throat all to some eerily cutesie music. The Marilyn Manson part was good. Quite dramatic.

The Trickster, yeah he’s the one. The joker in the series. But full marks to his tricks. The best is when he gets a man onto the stage and starts the drama. Tricking the poor guy off his belongings and doing it without his knowledge, ofcourse. His last act was so ridiculously funny. Tears of joy.

The Grand-illusionist. Its all for the drama. This guy made me want to believe my eyes, want to believe in magic. Sheer awesomeness. What with the girl levitating and all. His acts were undoubtedly the finest. And nothing gave away. Absolutely nothing.

Again, had my way, there would be gazillion pictures of the show. But then my phone was in great danger of being confiscated! So just a few =)

P.S. for those who are yet to see it, believe me I haven’t spoilt a thing!

Living it up . View all posts by Siddamsetty