So what exactly is it like to be vegan. Vegetarian is obviously not eating animals or rather not eating meat! To go from a carnivore to a herbivore is considered rather an overwhelming challenge, but going from a vegetarian to a vegan is considered to be relatively easy. In spite of the minor tweak in the diet, saying goodbye to yogurt, sugar (specifically, bone charcoal processed sugar) and particularly cheese could be quite hard. The very thought of not getting to eat chocolate or pizza, condensed milk or jalebi could possibly push one into depression! Or so we assume.

There are several alternatives for the same (that are equally fattening 😉 ) like maple syrup, peanut butter, french fries, vegan cheese, tofu, olive oil and well, dark chocolate! Or just stuff make with unprocessed sugar and soy-milk! So well the good news is that depression may not be high on the radar after all and the bad news for all the diet freaks, is that going vegan is not exactly a quick way to slimdom!!

But on a serious note, cutting out animal derivatives from our food is actually increasingly healthy. Research has demonstrated that a wide range of diseases from Heart disease to Cancer can actually be controlled through a wholesome plant-based diet. Though I bet the dairy farms and poultry farms wouldn’t vouch for that!

But apart from the myriad health benefits, yes yes I have read the pros and cons and have concluded that the pros largely beat the cons, its mostly about being kind to animals.

Yes, being kind to animals. That’s the exact sentiment that prods a Vegan, well mostly. Not using animal products in one’s lifestyle completely seals the Vegan sentiment. And no, there are largely no side-effects of kindness, vegans don’t have a dearth of nutrition as all the nutrients a person would need could be got from a plant-based diet. That said, potato chips fried in vegetable oil is also vegan, so vegan food is not about weight loss and not exactly about leaves on a plate!

And add to that list of showing kindness, is kindness to our planet. If the growing environmental concern, the melting icebergs, the depletion of fossil fuel, or any of that is of any concern to one then its enormously ecological to skip animal use for food.

So how does a vegan’s food pyramid look?

And what motivations could a vegan possible have?

P.S. If you’re still thinking, there are decent alternatives to meat, eggs, milk, cheese and sugar. They are unlike we believe, replaceable. And besides a vegan’s carbon footprint is way lower than even a vegetarian’s!

And further what many vegans believe. . 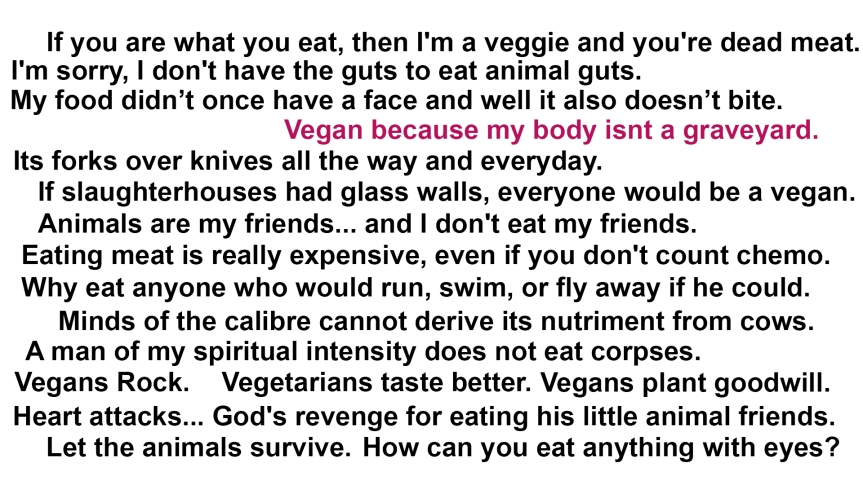